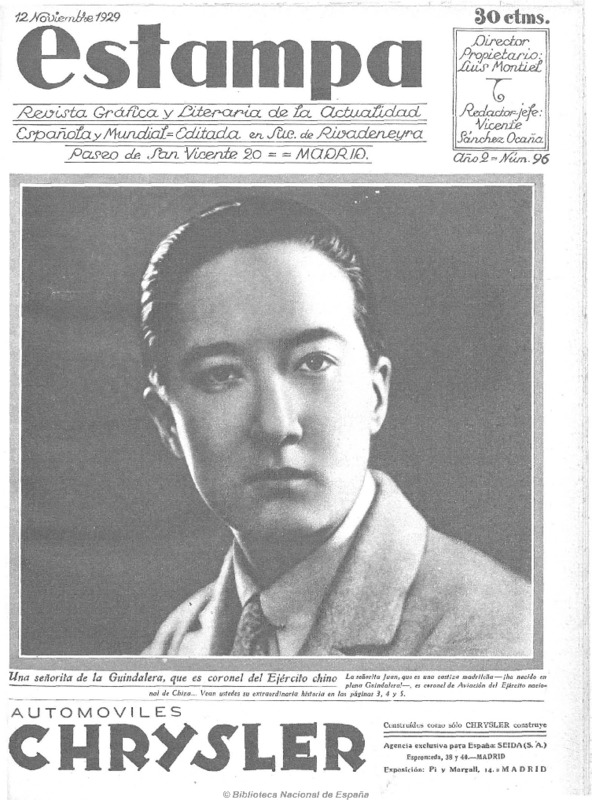 Marcela de Juan (Havana, January 1, 1905 - Geneva, 1981) was the hispanized name of Huang Masai (黄玛赛), a writer, translator and journalist key in the introduction of Chinese culture (and especially, Chinese classical literature) in Spain during the 20th century.

De Juan was the earliest daughter of Qing diplomat Huang Lühe 黃履和 and Juliette Broutá-Gilliard, a Belgian citizen with Spanish roots. Shortly after Marcela's birth, Huang Lühe abandoned his post in Havana for a new position in the Madrid Legation. During these years, during which the younger sister Nating 娜汀 (Nadine) was born, the family established connections with the local cultural and political elite, including writer Pio Baroja and politicians José Canalejas and the Count of Romanones. It was in Madrid where the family name mutated into the Spanish 'de Juan': as Huang Lühe became known under the nickname 'Juanito' (little Juan) for the proximity to the Chinese Huang, the daughter acquiered 'De Juan' (daughter of Juan).

In 1913, Huang Lühe was ordered back to a, by then, Republican China. Marcela lived in Beijing until her twenty-third birthday, a period in which she got to know key personalities of the modernizing project such as Lin Yutang or Hu Shi.

In the summer of 1928, Marcela was welcomed back in Spain by her uncle, the writer and translator Julio Broutá, who introduced the works of Bernard Shaw in Spain and was well connected in literary circles. De Juan would live in Spain until her death in 1981, with the exception of short periods abroad working as translator for Spain's Ministry of Foreign Affairs.

As journalist, Marcela De Juan wrote extensively about China for Estampa. Starting in 1929, her articles show a clear intention to break some of the stereotypes about China that were common in the Spain and Europe of the time. For example, she would comment in an interview that, contrary to contemporary images of China as “terrible and bloody”, life in China was as “bening and quiet as in any European region. Even more so, perhaps” (Estampa, August 21, 1928). She would also underscore the elements of modernity in the lives of the Chinese: “today bound feet and tails are a thing of the past. Young ladies dance charleston and tango, and young men dress in European fashion and grease their hair” (Estampa, December 3, 1929). She was adamant in her endeavour to combat misconceptions about China: “the ignorance of the Europeans about the intimate aspirations of the celestians, can be more easily charged to them than to the ancient esoterism of Asian peoples" (Estampa, December 27, 1930). In the same spirit of popularizing the reality of China, in 1934 she published her first book, a collection of sketches titled Escenas populares de la vida china (Folk Sketches of Chinese Life, 1934). 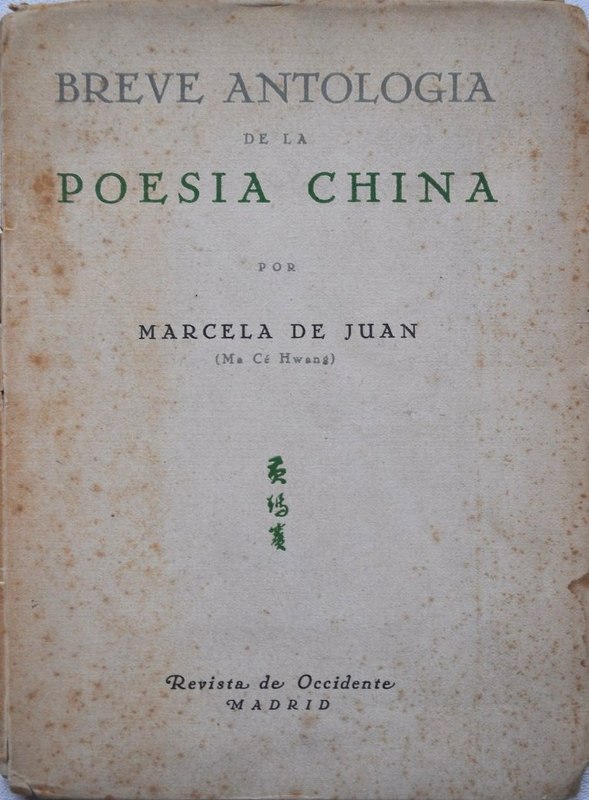 But De Juan is mostly remembered today for her task as translator of Chinese classical tales and poetry. Before 1950 she published Cuentos chinos de tradición antigua (Chinese Tales of the Ancient Tradition, 1948) and Breve antología de la poesía china (Brief Anthology of Chinese Poetry, 1948). Her translations strove for an equilibrium between literary quality, closeness to the originals and accessibility to the targer reader, to the extent that her works continue to be republished today. After 1950 she published Cuentos humorísticos orientales (Oriental Humor Tales, 1954), Segunda antología de la poesía china (Second Anthology of Chinese Poetry, 1962), Poesía china del siglo XXII a.C. a las canciones de la Revolución Cultural (Chinese Poetry, from the 22nd century B.C. to Cultural Revolution songs, 1973), and her book of memoirs La China que ayer viví y la China que hoy entreví (The China that I lived yesterday, and the China that I glimpse today, 1977), and the postumous El espejo antiguo y otros cuentos chinos (The Ancient Mirror and other Chinese Tales, 1983).

In addition to her journalistic and literary work, Marcela de Juan acted as translator and interpreter for the Spanish Ministry of Foreign Affairs, and founded the first association of professional translators in Spain in 1955.

Upon her death, José Ortega Spottorno defined De Juan as “one of the few links which the Spaniards have had, over the last years, with the strange, millennial and paradoxical Chinese civilization”, and Antonio Segura Moris, as a “key link—and for many years, the only one—between China and Spain”.